[Verse One]
I got a small problem (what?) I think my ego big, (how?)
Last week they snapped me trippin yellin fuck the pig,
I'm stressin out at work (where?) at dis navy gig, (daammn)
WTFs an order? bro i'm bout to do it big, (Shieet)
I'm splashdid up today, fuck a 9 to 5,
(Bet) Me and all my fam retire, before 65 (I will)
(If) you a real nigga, you out here getting live, (live)
Staying Splashdid up lookin haters in they eye
All my beats bananas bro, I spit sinking titanic flow,
The fourth down ely manning keep a handy dj cannon tho, (fo reaal)
Track Star Splashdid sloppy drunk good, (ok)
Ken wood Splashdid cranked up for da hood,
Stack that money to the sky, keep yo hate high (high)
Making em super mad be nicer than a nice guy
Watch yo shot limit, (caution) If you new to this (this)
I rock my own custom gear My swag ludacris,

[Verse Two]
If yo bread strait i can show you how to coast, (reup)
Ride on yo enemies stomping hella roach, (c)
Not getting bread? well change thee whole approach,(proach)
Knowledge aint free buy in or you staying broke! (shiet)
Trap Music? (Yuh!) oh I love dat, (thats right)
Everything i do i do it cause i love rap (I do!)
Patron heavy (yee)  mix it wit da sprite
Radii shoes (ok) shirt's orange n white, (swag)
I own the studio i didn't come up overnight
if you aint getting splashdid u need a road map to the hype, (turn up)
Plus my swagger right, every sound is soundin tight,
I represent outstanding might, and if they trip i'm down da fight.
(eeeerrrrr!) Ready, for what, ever, if they, wanna, go to, war,
(yeah) Catch me, on the, stage, but I, pack the, tooly, boy,
(boooy) Meta, for, tae, call it, how I, see it, boy,
In the, club, posted, real, nigga, wit a, poise

[Chorus]
Like a double shot, (shot) I'm splashdid up,
Neighbors actin up, (uup) you really splashdid up
What you listening to (to) when you get splashdid up,
Shout out to da real Gs, who getting splashdid up!
Posted by Unknown at 11:05 PM No comments:

Check Out The New Flash Store for my beats at http://www.myflashstore.net/profile/16534:metafortae To Listen To The Beat Double Click On The Track Title. Let Me know if you have any questions or concerns

Buying The Instrumental
1. Click the checkboxes next to the songs you want to order.

2. Click the buy now button at the bottom right hand side of the myflashstore player.

3. You will be redirected to paypal for payment.


4. Once payment has been made you will instantly receive the download links to your pay pal email address. 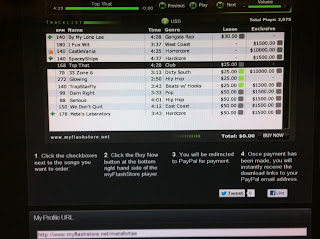 Posted by Unknown at 8:54 PM No comments:

License the music of Metafortae in a project

Need Metafortae For TV, Film Or A Project? Get A Commercial license through pumpaudio.com

License this music for commercial use through Pump Audio

This work is licensed under a Creative Commons Attribution 2.5 License

http://www.tunecore.com/music/metafortae
Posted by Unknown at 1:16 AM No comments:

Do You Really Want A Major Label Deal?

Do You Really Want A Major Label Deal?


This guest post comes from Robin Davey, a musician, artist and Head of Music and Film Development at GROWVision Media.

A recent survey suggested that 75% of artists are still chasing that ever-elusive major deal. This shows the credulity of bands, rather than the shimmering prospects that a major can offer.

At this stage of my career I have signed to two major labels and a bevy of independents, and I can tell you this from experience - you are a long way from “making it” at the time of inking a deal. Even when the advances used to be respectable, it would only set you up for a few months at best. After that you better be earning money independently of the record label, because it’s a long wait until that next advance is available.


When you take into account the cost of recording an album, paying a producer, giving your manager 20%, and splitting what remains of the advance between your band members, you can kiss goodbye those aspirations of putting an Escalade in the drive way. In fact you will be lucky to be able to afford to fix the oil leak in your Ford Focus.

The 360 deal further exemplifies this notion. If the majors take a piece of everything, the artist loses an even bigger portion of their lifeline when it comes to everyday survival.

In the current climate, the only way you will gain any major label attention is if you are already achieving a level of independent success. This is the catch 22 that the 75% of bands - who are still eager to pursue the major route - just don’t get.

If you already have independent success, why would you want to go to a major?

This is also what is weighing down the majors; they can no longer take the risk of signing every act with potential, and they cannot offer a lucrative incentive for those who are already proving themselves in the independent market.

With services like Topspin and Bandcamp, it is now easy to sell direct to your fan base. High visibility in the marketplace and accessibility to new followers are also far more obtainable without the need of industry muscle. As a result you have the prospect of earning substantially more independently, than the royalties filtered down through the corporate system.

It is the quandary of the industry which has deepened the us and them divide between musicians and labels. But this is really only the majors problem. Because they are the ones with plummeting profits, and it is the independent musician who is gaining a foothold.

The independent mentality is to do everything in house in order to keep costs down and productivity up. The corporate mentality has always been to get outside entities to do the job when needed. Although the majors would have departments to handle tasks like promotion, design and radio, it seemed they were only there to fulfill contractual obligations for the artists that did not show the prospects of real success. Any manager with experience would negotiate the use of an outside company to initiate a prolonged campaign, as opposed to the week or so the in-house department could dedicate to individual releases.

I do see the latest job hiring at major labels reflecting a more independent mindset. They are on the look out for multimedia creators to handle a plethora of tasks, and this is certainly a step in the right direction. However, if they want to survive they don’t need to be tentative about this, they need to be bold, because it is the boldness of independent bands that is winning the day. Musicians who unabashedly embrace new ideas, and create innovative and accessible content are making the break through. As yet this is something that the majors haven’t been able to compete with, or indeed, fully comprehend.

So aspiring bands and artists, I am afraid there is no easy route, the majors will certainly not provide it, and they never did. It comes down to hard work and offering up something different and innovative. And when the majors do come knocking, you will realize that the 25% who were not interested, are probably the ones who can actually pay their rent.
Posted by Unknown at 7:56 PM No comments:


Here’s an example of a daily, weekly, and monthly schedule:

Good starting point to make sure you get all your important social media items taken care on a consistent basis.
Posted by Unknown at 7:50 PM No comments: